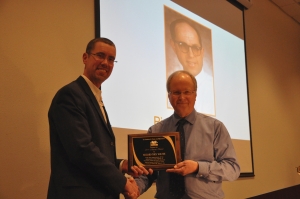 The Foundation’s Board of Director President, Scott Sorvaag, was honored to present its 2014 Legacy Award to a citizen that showed exemplary support to the Winona Area Public Schools with its goal to enhance education and support its students. The 2014 Legacy Award was extended posthumously to Richard “Dick” Kolter. Mr. Kolter was a public school math teacher with a passion for teaching and an undying inquisitive thirst for knowledge in the emerging field of technology. Accepting the award on his behalf was his friend, Jim Miller. The plaque will be displayed at the entrance to the WSHS Kolter Math & Science Wing.

Every dollar donated to the Foundation for Winona Area Public Schools will go towards grants and programs that will enrich the lives of students across the city.